I went to visit a friend’s fresh baby this afternoon, so I can now finally show this adorable little cardigan. The knitting itself was done a long time ago, but of course I did not sew on any buttons until the very last minute. It’s moments like these that I am especially grateful for my big stash of random buttons.

The knitting for this was done months ago; I started it back in June when she first told me she was pregnant. According to her due date, the baby was supposed to share my birthday (New Year’s Eve), but I’m very happy for him that he decided to come one day earlier. Although believing the fireworks are for your birthday is great, it’s a rather inconvenient birthday otherwise.

The original pattern is for a cardigan, but I changed it into a sweater by joining the body in the round after I separated the sleeves. I knit the three buttonband stitches together with those on the other side, and then simply worked in stockinette until the hem. Overall this was a very easy, quick knit and it looks adorable with the three different buttons. 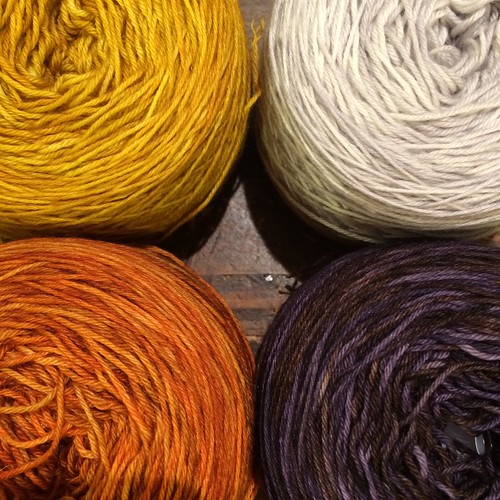 I’m not one for mystery knit-alongs, so I waited until all the clues were released to decide whether or not I wanted to knit Stephen West’s latest mystery shawl “Exploration Station”. After seeing a bunch of gorgeous versions pop up on Ravelry, it was time to make my own.

I’m using Hedgehog Fibres Sock in the colours Pollen (C), Crystal (D), Raven (A) and Rusty Nail (B) (clockwise from the top left in the picture above). This yarn is so gorgeous and soft, and an absolute joy to knit with so far. I’ve just started the brioche section today, so I expect it won’t take very long to finish at all! 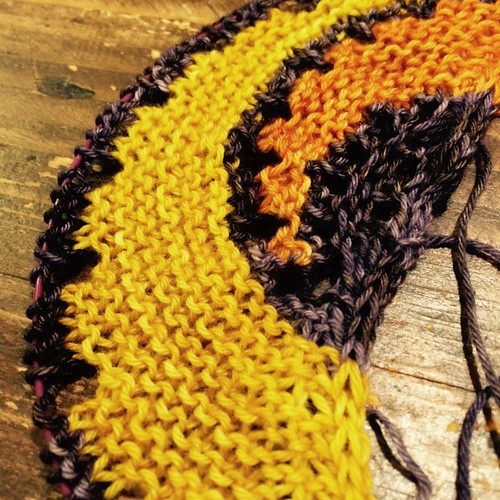 Just a quick FO post on an otherwise dreadfully lazy Sunday afternoon. A few weeks ago, I taught my BF to knit and his first “real” project is going to be this hat for his cousin’s baby boy, who was born last February. I feel kind of bad for knitting the same thing and finishing it before him, but it was is just SO CUTE. I’m obviously not giving this one to the cousin though, it’s going to a knitting friend whose baby should arrive in a few weeks. I’ve made the 1 year size, because hopefully there won’t be a need for hats until the baby is quite a few months older!

I should have been working on a wedding dress(!) I’m making for someone, but it was giving me grief this morning, so I cast it aside for a few hours, finally properly started watching Castle from Season 1, Episode 1 and finished up this cutie instead. I’m hardly original in knitting this one, but almost 5000 Ravelers can’t be wrong, now can they? In fact, I’m quite tempted to start another one for another baby!

When I was at de Breidagen  a few weeks ago, somehow none of the yarn really wanted to come home with me. My bank account was about as happy as I was disappointed. The only things I bought were supplies – from Stof tot Verven –  to start dyeing my own yarn, and these three skeins are the result.

The dark blue one in the back was my first attempt. I didn’t do anything special, just some blue dye in a pot. It ended up looking kind of denim-like because some spots took a lot less dye than others. It’s not extra-ordinary, but I like it.

For the purple one in the middle I decided to try something different. I mixed up some purple dye and let the yarn sit on the heat for about half the necessary time before I sprinkled in some dry red dye. That I left to do it’s thing for a few minutes before stirring it in. The end result is a beautifully semi-solid reddish purple with some quite red spots.

The third skein is my favourite, even though I’m not normally a fan of orange. I was originally going for a soft coral, but as you can see I got BRIGHT orange instead. This one was dyed similarly to the purple one. I started with yellow, but instead of sprinkling dry red dye over it, I poured a dye solution over it. This is probably my favourite method, because the colours flow into each other beautifully. The skein goes from deep, reddish orange to some sort of golden yellow.

The only downside of this whole thing is that I decided to practice on a batch of undyed yarn that I got a few years ago and absolutely hated to knit with. So now I have yarn that I hate to knit with, only in gorgeous colours that I DO want to knit with… Perhaps I’ll try weaving with them. At least there the splittiness won’t be as much of a problem.

Roses on Toast
Create a free website or blog at WordPress.com.