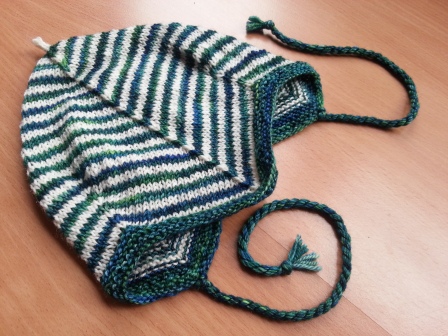 Just a quick FO post on an otherwise dreadfully lazy Sunday afternoon. A few weeks ago, I taught my BF to knit and his first “real” project is going to be this hat for his cousin’s baby boy, who was born last February. I feel kind of bad for knitting the same thing and finishing it before him, but it was is just SO CUTE. I’m obviously not giving this one to the cousin though, it’s going to a knitting friend whose baby should arrive in a few weeks. I’ve made the 1 year size, because hopefully there won’t be a need for hats until the baby is quite a few months older!

I should have been working on a wedding dress(!) I’m making for someone, but it was giving me grief this morning, so I cast it aside for a few hours, finally properly started watching Castle from Season 1, Episode 1 and finished up this cutie instead. I’m hardly original in knitting this one, but almost 5000 Ravelers can’t be wrong, now can they? In fact, I’m quite tempted to start another one for another baby!